The city of Pisa plays host to treasures of priceless value, making it one of Italy's most important cities of art. The allure of the Lungarni has featured in works by such authors as Byron, Shelley, Montesquieu, Leopardi, Carducci, D’Annunzio and Foscolo. But The Lungarni are especially spectacular at night with the lights from the lamps and buildings reflecting on the water of the river. On the evening of June 16th,  for the celebration of the patron saint, the outlines of the buildings and bridges are decorated with thousands of lights: this is the magical atmosphere of the Luminara (illuminations) and fire works on the river. The patron festival, held as part of the Giugno Pisano events, draws to a close with the Regatta of San Ranieri, a boat race which is a legacy of the prestigious tradition of Pisa'a Maritime Republic to be held on the 17th of June.

The tradition of lighting the city with candles dates back to 1688. In that year, the urn containing the remains of Saint Ranieri was placed in the Cappella dell'Incoronata in the cathedral, which is now dedicated to him. Cosimo III of the Medici wanted the antique urn that contained the saint's remains to be substituted with a more sumptuous and modern urn. The change was occassion for a memorable city feast and according to tradition, the Luminara, or "illumination" as it was called back then, was born. The event has been held every year since then except for a few interruptions.

Bonfires and candles to light up the city were used even before then as a way to celebrate a special event, such as that to celebrate the visit to the city of Margherita Luisa, princess of Orleans and wife to Cosimo II in 1662.  Today the celebration has taken a specific form: the architectural details of the palaces, churches, towers and bridges along the Arno (windows, cornices, balconies) are recreated with white wooden frames.

These frames are fitted onto the buildings and on these frames candles are attached and lit after sunset. Over 70,000 "lumini" (how candles are called in Italian when they are inside a container, glass in this case) burn and reflect on the river. Some candles are also floated on the waters of the Arno.

The city along the lungarno simply glows. The only additional areas in the city lit up aside from those along the river are the battlements on the section of city walls that surround Piazza dei Miracoli and the Leaning Tower itself, where oil lamps show off the tower's shape.

Around 11 p.m. a fireworks show from the Cittadella Vecchia (old citadel) can be best enjoyed from along the river.

A word of warning: the city streets can get very crowded, most of the university students are out enjoying themselves adding a bit to the confusion. We found taking side streets away from the main Corso Italia and Piazza Garibaldi/Borgo Stretto to be a good idea to avoid getting crushed in the crowds.

But the main event of the day takes place in the late afternoon of June 17. The four quarters of the city challenge each other in a Regatta on the Arno in remembrance of the nautical tradtion of the city.

Each quarter has his own colors:

The race takes place over a 1,500 meter-long stretch of the Arno, rowing against the current. The start of the race is near the bridge used by trains to cross the river and the finish is in front of the Palazzo Medici near the Ponte della Fortezza. The boats, with fixed seats and a crew of 8 oarsmen, a helmsman and "montatore", are made in the style of the frigates of the Medicean Order of the Knights of St. Stephen, a military order founded in 1561.

Victory does not go to the first boat that arrives, but depends on the ability and agility of the boat's "montatore" (climber) to climb a rope and grab the correct flag at the top of a 10 meter pole mounted on a boat anchored at the finish line!

I say the correct flag because there are 3 flags at the top of the pole, each in a different color.

The white one second place.

The red one third

The last montatore is left with no flag and instead receives a pair of geese as a consolation prize. It is said that this particular tradition goes back to the origins of the competition itself. Back when there were more races held both on land and water on the feast of the Assumption in the 13th century, in addition to the "palio" or banner, prizes were often animals: an ox, sheep, pig or rooster were the better prizes, the geese were seen as a lesser win. Depending on the period in time the city was going through, the rowing contests on the Arno were sometimes held, sometimes not.

After interruption of the games in the period of Florentine domination over the city, the tradition was once again started on the feast of the Assumption in 1635. San Ranieri had just become patron saint in 1632 and some of the games were moved to his feast day.

The regatta has taken its present shape throughout the course of centuries. Witnessing the regatta today is seeing a competition deeply rooted in tradition. Since 1737, the regatta has taken place in this part of the Arno, with the finish line in its current location, with the boarding of the vessel at the end. This particular aspect of the regatta recalls the victorious Battle of Lepanto of 1571 in which the Order of St. Stephen took part against the Ottomans. The fleet had to board the ship of the "infedels" and conquer the battle pennant found on the ships' flagpole. The pennant conquered by the Pisans is today conserved in the Church dei Cavalieri (of the Knights) in the Piazza dei Cavalieri, one of Pisa's most beautiful and important squares. 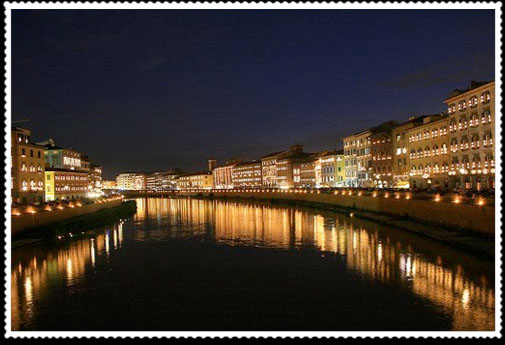 The “Regatta of San Ranieri” 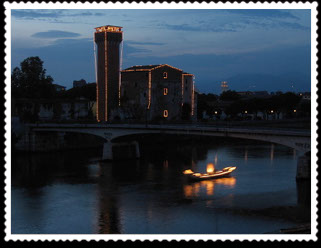 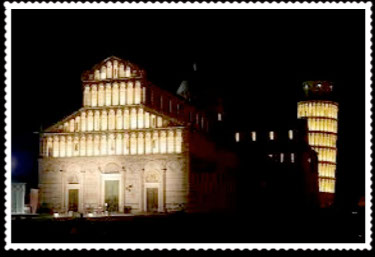 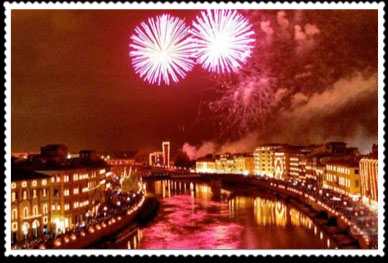 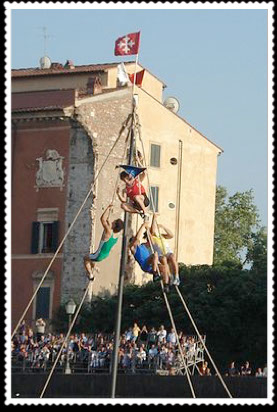